Gemstones have been desirable since ancient times, and are as appealing to us today as they were to our ancestors generations ago.

Sheila uses both precious and semi-precious stones throughout her jewellery designs, with each stone set-by-hand in our Orkney workshop. We carefully source gemstones for their quality and colour ensuring you receive the best quality stones. All of our gemstones are natural except for cubic zirconia, which are synthetic.

Since our stones are set by hand, it is possible that alternative stones can be set into your chosen design. For example, if you see a ring or a piece of jewellery with one type of gemstone, but would prefer another, it may be possible for us to do this for you. Find out more about jewellery made just for you.

Most gemstones can be safely dipped in silver dip or gold dip, but not pearls and great care should be taken when cleaning jewellery set with opals, for further tips see our Caring for your Jewellery guide.

There are only four stones in the world classified as precious gemstones and we are proud to say we use them all in our jewellery and rings. The “Big Four” are:

Diamonds, reputedly a “girl’s best friend”, are the hardest naturally occurring material known to man. They are one of the most treasured stones in the world and feature strongly in Sheila's Engagement Rings, Ring Sets and Eternity Rings as well as many of her jewellery collections. Our Guide to Diamonds has more information about the Cut, Clarity, Colour and Carat of the diamonds we use.

After diamonds, sapphires are the next hardest gemstone and one of the most valuable. Sapphires belong to the corundum family of rock minerals, which occur in many colours. All colours, other than red corundum, are known as sapphires, with a blue sapphire being the most coveted even though other colours may be rarer. Sapphires are stunning set in white gold, such as Sheila's Celtic Trilogy Ring.

Ruby, known for its bright red colour, is a variety of the corundum mineral. All other varieties of the mineral are sapphires. Like sapphires, rubies are second only to diamonds in their hardness and brilliance, but they are rarer than both diamonds and blue sapphires. Sheila's Celtic Knotwork Ring in 18ct yellow gold is hand-set with a ruby in our Orkney workshop.

These richly coloured stones belong to the beryl group, which also includes aquamarine. Emerald's captivating green colour is unique and unparalleled in all other gemstones due to inclusions that make each stone unique. Along with high quality diamonds, blue sapphires and red rubies, the green emerald is one of the “big four”. Unlike the other three, however, emeralds are more fragile and exposure to excessive moisture should be avoided.

Like the blue sapphire, pink sapphires belong to the corundum family. While blue sapphires and red rubies have traditionally been recognised as the most desirable gems, the pink sapphire is rapidly gaining in popularity and demand. It is sometimes described as a “Pink Ruby” and the classification depends on how the colour is rated. If defined as a red rather than a pink it will be classified as a ruby rather than a pink sapphire. It is a beautiful stone and its lower profile means it is more affordable. Our Venus Solitaire Ring can be set with a pink sapphire.

A rare stone with a deep purple sparkle, tanzanite is one of the newest gemstones available in jewellery and was discovered as recently as 1967. All tanzanites used in jewellery come from a single mine in the Merelani Hills in Tanzania. Tanzanite isn't quite as hard as the “big four”. This alone prevents it being classified as a precious stone, although it is as rare if not rarer, highly sought after and beautiful. We are proud to use the highest quality tanzanite in Sheila's designs, like the beautiful Swirl Ring in white gold set by hand with a tanzanite and diamond.

A captivating, multi-coloured stone. Both solid white opal and black triplet opal are used in Sheila's designs. Solid opals are formed from a single opal stone and often feature a wonderful play of colour as the internal structure of the stone diffracts light. They can feature pink, red, orange, yellow, green and blue shades through to white.

Black triplet opals are not solid opal stones, but consist of three layers of stone. Our triplets have a layer of dark coloured onyx at the bottom, a middle layer of opal and a top layer of quartz. The dark onyx highlights the play of colour in the opal, and the quartz on the top protects the opal. Combinations of green-blue, red-blue or blue-red-green can often be seen.

Our Moonlight collection in gold features solid white opals. Black triplet opals are also available on request, but they are more challenging to match if choosing a set of jewellery.

Topaz is one of the world's most popular coloured gemstones. It's a hard gemstone with excellent clarity offering extremely good value for money. Sheila's designs use blue topaz of which there are three different types: Sky Topaz is a pale blue stone, Swiss Topaz is a mid bright blue and London Topaz is a darker blue. The bright Swiss Blue Topaz, reminiscent of a blue ocean, is the type used in our designs. If you like blue topaz Sheila has incorporated it in collections such as Reef Knot, and in her Tidal pendant and earrings.

Peridot belongs to the olivine group of stones and, unlike most other gemstones, are an “idiochromatic” gem meaning its colour comes from the chemical composition of the mineral itself and not from contact with external materials. As a result, peridots are found in shades of one colour only: green. They refract light wonderfully and have a lively, contemporary, almost lime-green colour, which tones beautifully with yellow gold. They are becoming ever more popular and Sheila uses them in a variety of designs. You can find peridots throughout the Rowan collection in 9ct yellow gold, as well as Sheila's Matrix ring. If there's a particular design you would like set with a peridot, please just ask!

Garnets are widely known as a deep red gem. The name “garnet” derives from “gernet”, which is old English for “dark red” and “granum”, the Latin for “grain or seed”. This may be a reference to the pomegranate whose vivid red seeds can look similar to some garnet crystals. Garnet is also found in other colours but it is the beautiful claret-red variety that Sheila has used in her silver Garnet Cathedral collection.

Rhodalites belong to the garnet group and are also known as Rhodalite Garnet. They tend to be lighter in colour than a garnet—a more pink-red or rose shade—and are often regarded as a higher-quality gemstone as it has more sparkle. We use rhodalite in Sheila's Celtic Knotwork Ring but we can set the gemstone in alternative designs on request.

Like opals, moonstones diffract light and this visual effect gave rise to the stone’s name. Moonstone has been used in jewellery and rings since ancient times and is associated with the power and mystery of the moon. We source the top grade moonstone colour known as fine blue and this is one of Sheila’s favourite stones. Sheila uses moonstone to embellish her designs like droplets of water. It graces her popular Morning Dew, Moonlight, Rowan and Wild Grasses collections.

Pearls are created within molluscs and are renowned for their lustre and the way light reacts with their surface. We use freshwater pearls from freshwater mussels in Sheila's designs. Take a look at Sheila’s lovely Lunar Pearl collection which incorporate pearls in silver and gold.

Care must be taken when cleaning pearls and they should never be placed in silver dip. Have a look at our Caring for your Jewellery guide for more information.

A mineral form of iron oxide, this stone is red when cut or powdered, and its name comes from the Greek for “blood”. Unlike other precious and semi-precious stones, hematite is opaque and does not diffract light. Its surface has a magnificent metallic shine and it can look similar to silver when polished. Sheila has used polished hematite stones in several pieces inspired by Orkney’s history such as her Ogham cufflinks, Runic torque bangle and magnificent Celtic penannular brooch.

This stone is scientifically known as banded chalcedony, which is a form of silica containing quartz. Onyx occurs in many colours, notably black, white and red, but when red it is known as sardonyx. It becomes wonderfully shiny when polished and is used to great effect in Sheila's Orkney Celtic Connection.

Amethyst is the purple variety of crystalline quartz, with colours ranging from pale lilac through to deep reddish purple. Unlike many gems, amethyst is readily available in larger sizes and, due to this, even larger stones are comparatively affordable. These vibrant stones have been used in jewellery throughout history and Sheila has set amethysts in jewellery inspired by tradition. Take a look at the Celtic Trinity collection, Thistle collection and Sheila's Ogham kilt pin.

Citrine varies in colour from yellow and gold through to orange-brown shades. They are the yellow variety of crystalline quartz and are the second most popular quartz after amethyst. Like amethyst, citrine is an affordable gemstone and is also available in larger sizes. This gemstone looks striking set in both silver and gold. Take a look at Sheila's Ogham cufflinks and Tidal pendant.

Tourmaline appear in more colours than any other gemstone. They can exhibit a full spectrum of colours from colourless to black, and every tone from pastel shades to dark hues. Often more than one colour is visible in tourmaline. Sheila's silver Celtic Knotwork Ring is set with a pink tourmaline.

Cubic Zirconia is a bright stone often set in silver as a very affordable alternative to diamond. This stone is also known by its initials CZ and is the only stone we use that has been produced synthetically rather than by nature. We use European cubic zirconia, which are brighter and of a higher quality than normal commercial CZ stones. Take a look at Sheila's rings set with cubic zirconia. Like diamonds, they also come in different colours and we can offer lilac, pink and light blue on request.

Other stones including birthstones not mentioned above may be available. Please contact us to discuss. 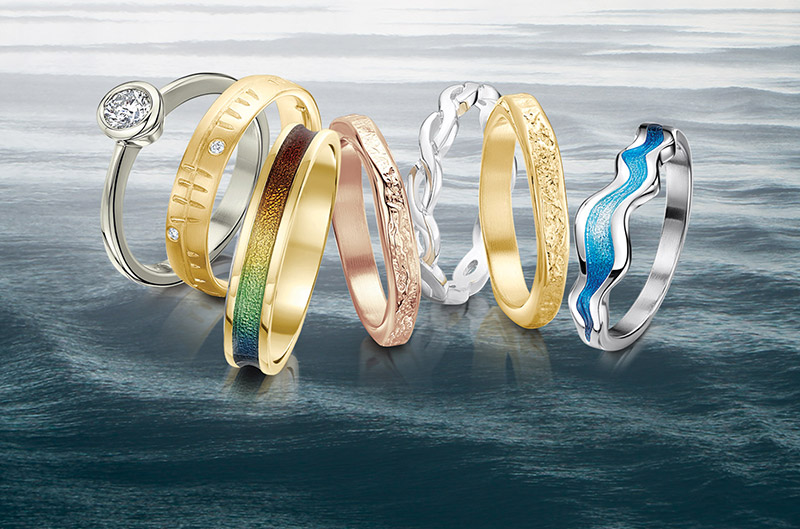 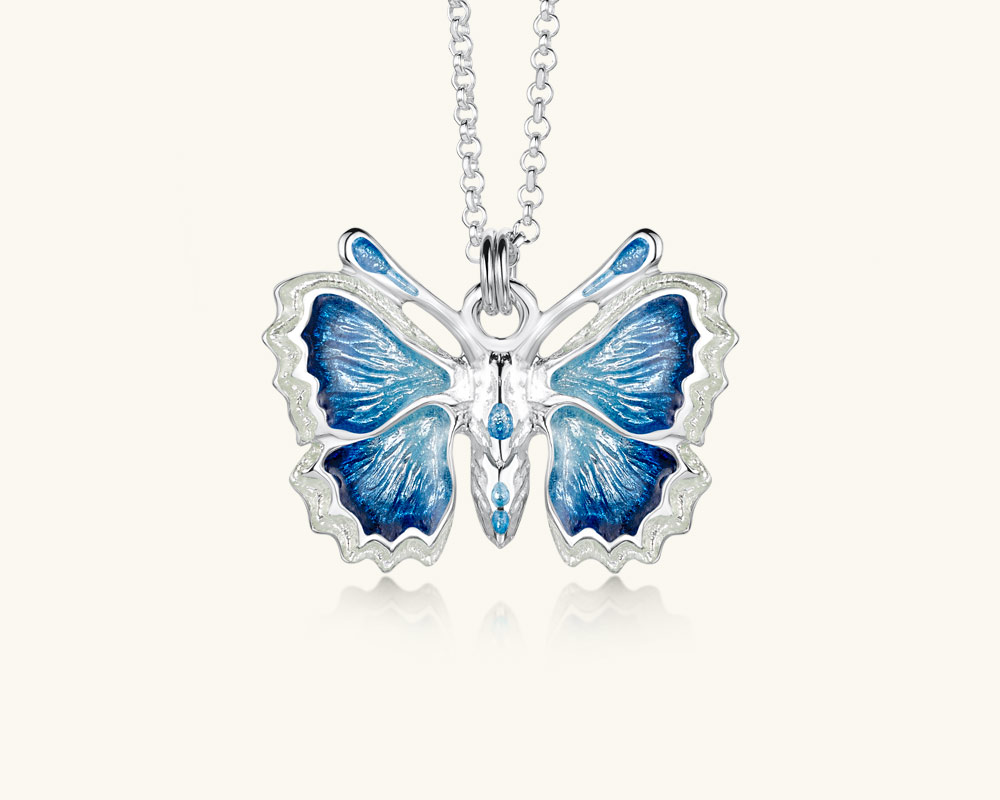 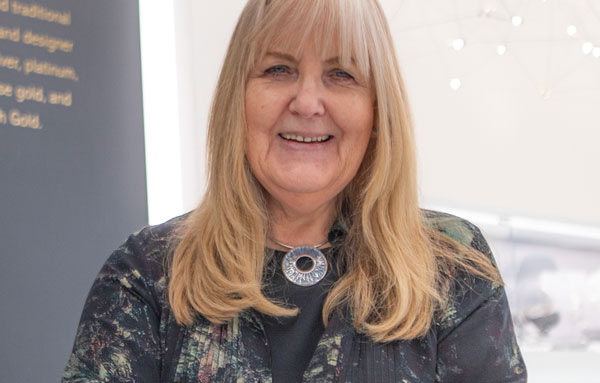